Home » The dive of the month » Whales watching, Tahiti

Tahiti, The dive of the month

End July to October, is the season for the humpback whales migrate to French Polynesia. It was the best opportunity for me to dive with them. Arriving at TOPDIVETahiti dive center at 8:00 am, I was quite excited by the confrontation that awaited me. About ten people, divers or not, were ready and waiting “to see the show”.

I must admit that it was pleasant to come for the first time to the dive center without carrying my big gear bag! For whale watching, one just needs to get comfortable on the boat with a wetsuit, fins, mask and a snorkel. The rest of the crew, Franck our dive instructor and Teiki the boat pilot, were armed with binoculars and a stopwatch to time the mammals’ dives and surfacing and better anticipate where to “catch” them next . 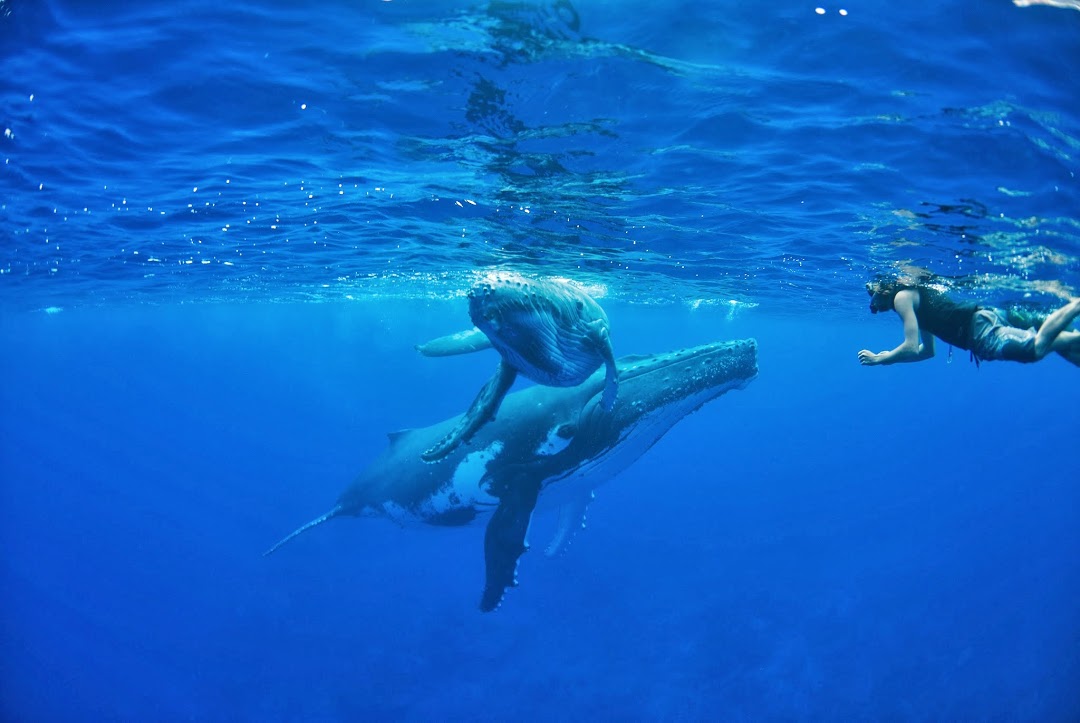 Swimming with whales in Tahiti

8:30 am, take off from the TOPDIVE center in Tahiti!! As usual, the trip starts by the instructor’s briefing. Franck reminds us of the mains rules of whales watching: stay calm, do not try to touch the whale, and do not bang on the boat hull… The noise apparently perturbs the animals and incites them to flee.

As we take off, we head for the pass and take to the open ocean, where most of the whale watching takes place between Tahiti and Moorea. Once out of the lagoon, we keep our eyes peeled. Everybody on the boat is scanning the horizon searching for a whale sign. Franck, a veteran at whale scans the horizon with a watchful eye. After twenty minutes, he locates a strong upward gush of air about 500m northeast. This gush appeared to be V-shaped and characteristic of the humpback whale. We try for an approach …

“ After observation, we approach them through the right side with reduced speed minding not to cross their path… We gingerly move closer taking care not to get between the mother her young calf. ”

In high season, you sometimes find many spectators for his natural phenomenon. Luckily we are the only ones on the spot today. We keep a safe distance from the animal giving ourselves enough time to study its dives and movements. Frank confirms that this is a mother and her whale calf in a phase of socialization. Indeed, some researches explain that you can identify the four phases of activity of whales by studying their behaviors: rest, displacement, hunting and socialization.

After observation, we approach them through the right side with reduced speed minding not to cross their path… We gingerly move closer taking care not to get between the mother her young calf.

It was such a magical moment….with their fins breaking the sea surface and the power of the air released from its spout I found quite impressive. Makes you think how insignificant we are in size compared to these behemoths!
I noticed that everybody on the boat was secretly waiting for one thing: the go signal to get in the water and snorkel closer to observe the whales. As Franck explained, this signal comes from the whale according to its three types of reaction: the shunning, the approach, and the disinterest. This time, luck was with us; the female seemed eager to meet us and slowly approaches the boat with her baby.

After seeing this and several minutes later, we were all in the water. It is even more breathtaking underwater!! We observed the whale cuddling her baby. She seems to guide the whale calf for its first moments in the ocean. We felt the love and tenderness of these creatures. It was pretty amazing! And here we were… 8 snorkelers awe-struck by the beauty of these mammals a few meters from us. Graceful in their movements, ones feels miniscule beside them in the vastness of the ocean. I see the eye of the mother who is constantly watching us while her little one seems to want to approach us.

The photo buffs had a field day. Snapping away at the scene. I realized the chance of a lifetime I had experiencing this!!! With super visibility, the details of the mammals were as clear as can be: a bumpy rostrum, symmetrical blowholes, a spotted caudal fin…

After a few minutes of this immense natural event, the whale takes her exit: leading her youngling with her, disappearing in the direction of Moorea. I return to the boat head full of images. I vowed to come back soon and I hope to hear the song of a large male next time. 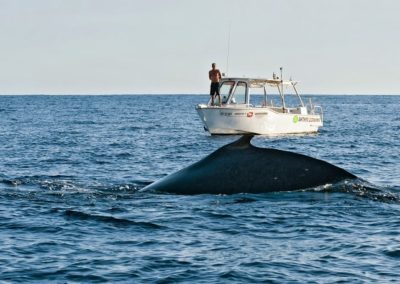 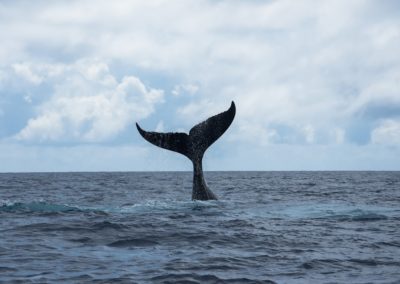 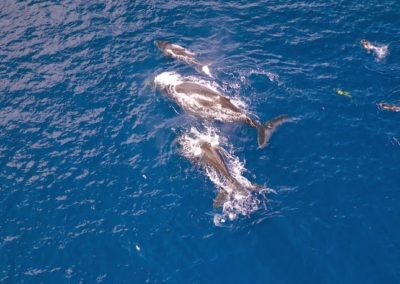 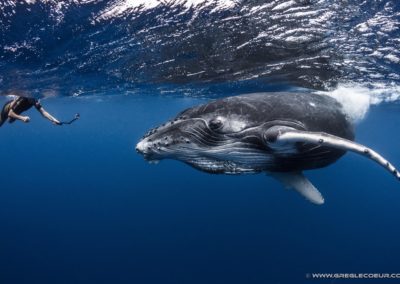 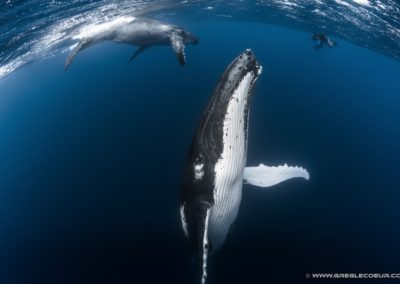 The Great barracuda (Sphyraena barracuda) appears as the “giant” of the barracuda family. It measures around 6.5ft; it is the most impressive species in size. This long fish can weigh up to 110 Lbs. It has a silver-grey color that makes the species...
More
Whales watching, Tahiti was last modified: November 29th, 2018 by Topdive
Share This